If a bargaining representative for a proposed single-enterprise agreement (other than a greenfields agreement):

has concerns that bargaining for the agreement is not proceeding efficiently or fairly, and

If the Commission grants the scope order, the order will specify the employer (or employers), and the employees who will be covered by the proposed agreement. 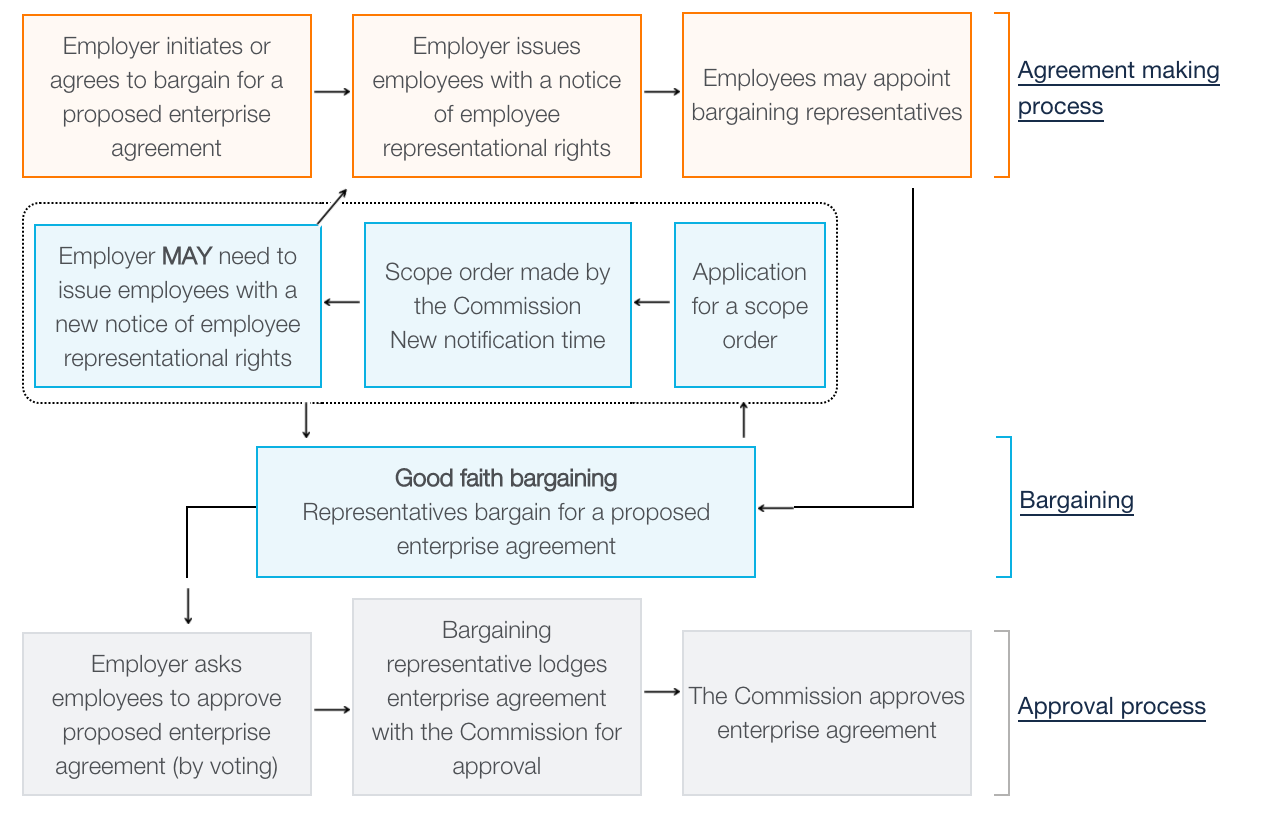 A bargaining representative for a proposed single-enterprise agreement may apply to the Commission for a scope order.

Steps prior to application

A bargaining representative must not apply for a scope order if a single interest employer authorisation is in operation in relation to the proposed enterprise agreement.

Powers of the Commission

The Commission may make a scope order if it is satisfied in relation to each of the following matters:

A scope order must specify the employer (or employers) and the employees who will be covered by the agreement.

A scope order may relate to more than one proposed single-enterprise agreement.

If the Commission makes a scope order, it may also:

Operation of a scope order

A scope order in relation to a proposed single-enterprise agreement comes into operation on the day on which it is made.

A scope order ceases to operate at the earliest of the following:

The date that a scope order comes into operation becomes the notification time for issuing a notice of employee representational rights.

However, an employer is not required to give a new notice of employee representational rights to an employee if:

The Full Bench did not accept the UFUA's submissions that, as a matter of statutory construction, preference ought to be given to agreements that cover as much of an enterprise as possible.

In deciding to make the scope order requested by the employer, the Full Bench noted that the Fair Work Act requires the Commission to consider the views of employees. While it does not assign priority to the views of employees, in applying the relevant provisions it is necessary to have regard to the overall context. The Full Bench considered that a proper consideration of the matters specified in the Fair Work Act may make it appropriate to make a scope order contrary to the views of the potentially affected employees.

The Full Bench determined that the two classifications constituted a distinct organisational group and commented that their negotiating interests as management employees would on occasion be very difficult to reconcile with those of operational employees generally. They considered that significant weight should be attached to the fact that the relevant classifications were senior management positions, with interests distinct from the positions below them.

The Full Bench concluded that a scope order in the form requested by the employer would promote the fair and efficient conduct of bargaining and include a group of fairly chosen employees. Accordingly a scope order in that form was made.

The technicians worked in a laboratory building within the refinery site some 200m distant from where the operators worked.

At first instance, the Commission granted the scope order sought by the employer and refused the application of the AWU on the basis that the 2 groups of employees were both organisationally and geographically distinct. The AWU appealed the decision.

On the evidence, the Full Bench found the group to be covered by the AWU's proposed single agreement was fairly chosen. The decision and orders of the Commission were quashed.

Scope order NOT made

The NUW made an application for a scope order in relation to a proposed agreement to replace the Linfox Road Transport and Distribution Centres National Agreement 2011. That agreement covered approximately 3,000 employees at 146 sites. A large proportion of employees were members of the Transport Workers Union (TWU).

The NUW sought a separate agreement for the warehouse portion of Linfox's Truganina site. Bargaining for such an agreement would involve both the AWU and the TWU. Linfox opposed the scope order, seeking to retain a single national enterprise agreement.

Nevertheless, Linfox engaged in separate bargaining processes with the TWU and the AWU and prior to the scope order application, in principle agreement for a proposed enterprise agreement was reached with the TWU.

At the hearing of the scope order application, the NUW contended that bargaining was not proceeding efficiently or fairly because:

The ARTBIU made an application for a scope order which would remove a particular classification of employees of ARTC called Network Controllers from coverage of a proposed enterprise agreement. The proposed enterprise agreement has been the subject of bargaining aimed at establishing a replacement for an expired instrument, the Australian Rail Track Corporation (NSW) Enterprise Agreement 2009. The ARTC advised the union that it rejected any separate agreement or agreements for any of the classifications that had been identified in the log of claims.

Many of the concerns raised on behalf of Network Controllers involved issues regarding roster arrangements for continuous shift work. Network Controllers worked on a continuous rotating shift roster basis as did most other employees who worked in operational control and coordination functions of the ARTC. However the substantial majority of employees covered by the 2009 NSW Agreement worked in areas other than operational control and coordination. Therefore the majority of employees to be covered by the proposed agreement did not work on a continuous rotating shift roster basis.

The specific classification of Network Controller was one of a number of classifications which, to varying degrees, worked in an integrated fashion with one another within what was frequently described as the Operations Team.

The Commission was unable to establish that the group specified in the scope order, namely Network Controllers, was a group that was fairly chosen. In particular the evidence did not establish that this group was geographically or operationally or organisationally distinct. In addition, the Commission was unable to conclude that the scope order sought would promote both fair and efficient bargaining. Although there was considerable sympathy in respect to the underlying issues of legitimate concern to Network Control staff these issues cannot be remedied by way of the scope application made in this matter.