We are working to fix links to documents on some webpages and our Benchbooks.

The Appeal proceedings practice note provides a general explanation of appeal rights and sets out the procedures followed by the Commission when listing, hearing and determining appeals.

Division 3 – Conduct of matters before the FWC

(1) A person who is aggrieved by a decision:

(a) made by the FWC (other than a decision of a Full Bench or the Minimum Wage Panel); or

may appeal the decision, with the permission of the FWC.

Note: Subsection (2) does not apply in relation to an application for an unfair dismissal (see section 400).

(3) A person may appeal the decision by applying to the FWC.

(1) Despite subsection 604(2), the FWC must not grant permission to appeal from a decision made by the FWC under this Part unless the FWC considers that it is in the public interest to do so.

(2) Despite subsection 604(1), an appeal from a decision made by the FWC in relation to a matter arising under this Part can only, to the extent that it is an appeal on a question of fact, be made on the ground that the decision involved a significant error of fact.

A further illustrative list of errors which may be made by a Tribunal is set out in Craig v The State of South Australia (1995) 184 CLR 163 and approved in Minister for Immigration and Multicultural Affairs v Yusuf  (2001) 206 CLR 323 and Kirk v Industrial Relations Commission; Kirk Group Holdings Pty Ltd v WorkCover Authority of New South Wales (Inspector Childs) (2010) 239 CLR 531.

The Full Bench may also intervene on the basis that the decision subject to appeal is unreasonable or plainly unjust.

"... the public interest might be attracted where a matter raises issues of importance and general application, or where there is a diversity of decisions at first instance so that guidance from an appellate court is required, or where the decision at first instance manifests an injustice, or the result is counter intuitive or that the legal principles applied appear disharmonious when compared with other recent decisions dealing with similar matters ..."

Lodging a notice of appeal

The appellant must number the pages of the appeal book.

The appeal book must be lodged within 7 days of the lodgment of the notice of appeal.

A copy of the outline must also be served on the other parties to the appeal. 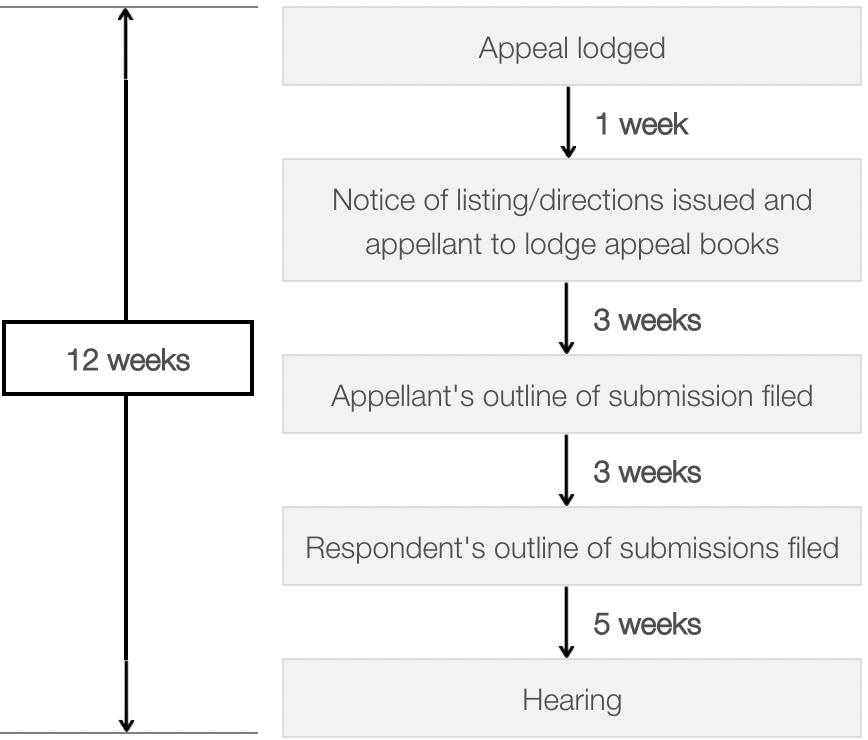